The Underwater Secrets of Los Islotes 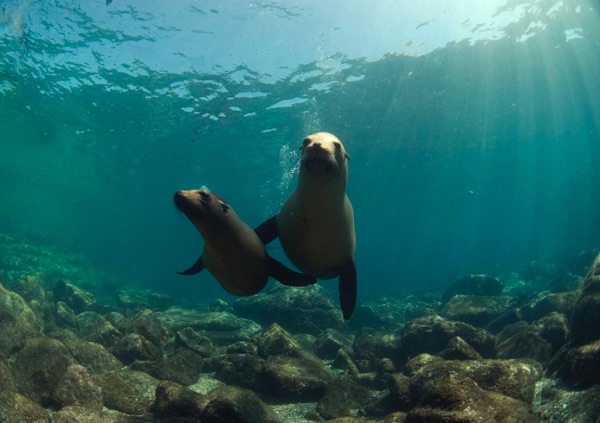 Discover sea lions, as you’ve never experienced them before.

The rock formations in the distance seem to sparkle with gold. You rub your eyes and take a closer look across the surface of what are actually two islands dappled with crags and caves. Hidden in the crevices between rocky outcroppings are California Sea Lions, basking in the sunlight, their golden backs and bellies absorbing the Mexico island sunshine. They love nothing more than to huddle together and snooze along the towering rock walls, slipping in and out of the water as they please. Some venture to the highest parts of the island, resting on what appear to be uncomfortable rocky peaks.

These are the wonders of tranquil Los Islotes, a group of gnarly volcanic rocks that jut through the shimmering surface of the Sea of Cortez in Baja, Mexico. From overhead, the bay that surrounds Baja’s Espiritu Santa Island, or Holy Spirit Island, is impossibly azure blue and sparkling, providing the perfect playground for the permanent colony of 450 Sea Lions that call Los Islotes home. A mere 20 miles north of the cosmopolitan capital city of La Paz, this island is protected territory, and for a good reason. Here is where the Sea Lions mate in the springtime, where the females guard their young pups, and where the pups learn to swim on their own.

While Los Islotes looks striking from a distance, it’s underwater where the true adventure begins. Diver and National Geographic videographer Luke Inman has lived at Los Islotes for a decade and spent his first four years there diving its waters daily. He describes diving Los Islotes as “an incredible experience.” In autumn, after the Sea Lion pups have had a chance to grow, they venture into the temperate waters of the island. They swim and scamper amid the colorful riot of underwater scenery that makes the area a paradise for scuba divers and snorkelers. 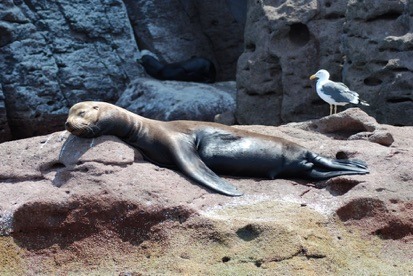 The older pups, the ones approaching one to two years of age, take the opportunity to venture forth and interact with divers. It can be rather astonishing to see a four-foot-long creature swiftly swimming in your direction, until you witness the game of tag it plays, arching away from you at the last moment, only to flip about and head your way again. They are ecstatic with their antics, looking divers in the eye and encouraging them to interact. It’s not uncommon for divers to tire of playing before the pups do. When the divers return to their boats, they often find that the pups circle the boat, barking at them as if to implore them to dive back in.

Inman has had ample opportunity to engage with them, as he recently contributed to a eight-part series on oceans for BBC which highlights Islotes’ natural wonders. Anne Laking and Helen Thomas produced the series because, they claim, “We know more about the surface of Mars than we do of the depths of the Earth’s oceans.” They seek to reveal the amazing, eons-old stories held beneath the water’s surface.

Inman says, “I spent three or four months working with the BBC shooting one about the Sea of Cortez.” The result is a spectacular journey told from the perspective of a first-class diver. He describes his dives with the Sea Lions as “the closest experience you can get to diving with Labrador puppies underwater.” He has had the surprise of a Sea Lion approaching to give him a friendly nudge. “I’ve even held one, literally in my arms, scratching it behind the ear.”

The draw of the Sea Lions, along with the area’s exotic biodiversity, has earned Los Islotes inclusion in Jack Jackson’s definitive guide, Diving: The World’s Best Sites. After spending 15,000 hours underwater in the world’s various scuba hotspots, Inman would agree. He names Los Islotes as his top pick for diving and states that, if given the opportunity to dive in only one locale for the rest of his life, he would choose Baja’s stellar underwater kingdom. Though the adventure begins and ends with the Sea Lions, divers are also treated to visions of enormous schools of fish, marlin, jawfish, seahorses, triggerfish, damselfish, various types of rays, barracuda, and, in certain seasons, whales. 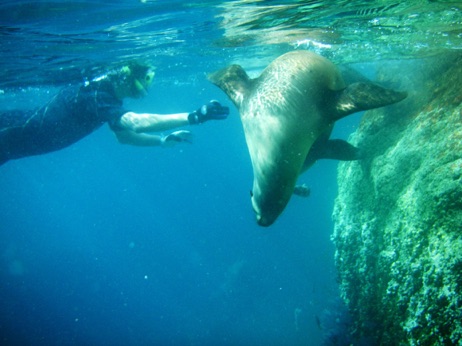 A mere two hundred yards long, Los Islotes has a fascinating topography, with a cliff that has been intricately carves by years of contact with the water, as well as a massive rock formation with a tunnel in the middle which divers can swim through to catch sight of eels, pufferfish, and, in the distance, manta. A couple small coves and caves dot the western shore of Islotes, offering hideouts for parrotfish, leopard groupers, and barberfish.

Autumn is a prime time to view the wildlife in action because the Sea Lion pups are at their most active and inquisitive. Water visibility is ideal, extending to about 100 feet, affording a striking clarity for seeing sea creatures as well as their habitat. The air temperature has cooled from the more extreme summer sun, but the water remains temperate and comfortable for long diving sessions. There is little to no current, and divers need only go 25-30 feet under to take in the scenery. 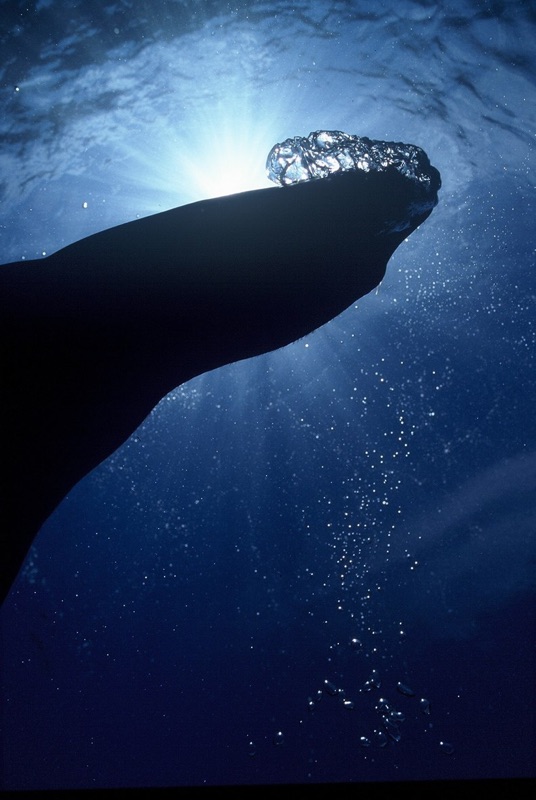 Another nearby dive is El Bajo, also known as The Sea Mount. The conditions and current are a little rougher here, but the reward of diving near these three submerged pinnacles is sighting multitudes of fish, the occasional turtle, and, lurking a bit further off, hammerhead sharks. At the south pinnacle, divers may spot groups of large moray eels.

But perhaps the most enticing sport for non-divers and divers alike has to be photography. Videos and photographs of the area betray the secrets beneath the water’s glassy surface and betwixt the jagged rocks. Another world awaits the person behind the camera, be they amateur shutterbugs who seek the ideal souvenir from a singular place, or the seasoned experts who endeavors to encounter a landscape and seascape that is wholly different from those they have captured on film in the past. Creating a visual journal of Los Islotes is a must, because of the area’s cacophony of colors and the once-in-a-lifetime opportunity to see wildlife up close and personal.

Flying Adventures photographer, Michael Higgins, and videographer Luke Inman, both scuba divers and photographers for National Geographic, joined forces to lead a photographic and marine life adventure. The crystalline waters, diverse marine life, and rocky islands of the Sea of Cortez near La Paz create ideal backdrops and subjects for capturing the perfect nature shot, and October is a prime time to take advantage of gorgeous weather and top viewing conditions. Mornings open with photography brainstorming sessions, highlighting tips and techniques for all skill levels. The late afternoons and evenings include visits to the Beach Club, where participants can view the day’s photographs on the wide screen.