More Water Falling in Yosemite than in 50 Years

Leaps freely from the cliffs, sways and sings in the wind, clad in gauzy, sun-sifted spray, half falling, half floating, kissing and splashing notes and thunder-like detonations, wrote John Muir, one of the first explorers and naturalists of Yosemite National Park. He was our nations most influential conservationists to this California wilderness and passed along his passionate inspirations of this glorious iconic valley.

Renown throughout the world for its majestic waterfalls, sheer granite cliffs, wildflower meadows and giant sequoias, twenty Flying Adventurer travelers set out to explore the famous national park on a Fly-In photographic expedition with two great photographers. Flying Adventures’ very own, Michael Higgins, who has photographed every cover of Flying Adventures Magazine for the past seventeen years including a plethora of breathtaking shots for numerous stories (SpectacularPhotography.com). And Yosemite’s Nancy Robbins who has lived in the park for over ten years photographing spectacular images and knows the right spots at the right time of day to get the best lighting and angle of the best places to capture perfect images of Yosemite.

This was truly an amateur photographers dream and extra special treat to spend time exploring a national treasure with a local photographer to knows all the nooks and crannies and breathtaking vistas/angles to shoot. Even if you did not want to photograph, she puts you standing in that “picture perfect” spot. With record snowfall in the Sierra’s this year it created the swelling of Yosemite’s iconic waterfalls, streams and rivers. The best time to visit the valley for thundering falls is the springtime, especially late May and early June.

First stop, the Mariposa Grove to view the Giant Sequoias, known as the ‘King of the Conifers’ with towering giants that have trunks over twenty-five feet in width and live past 2,000 years. While Robbins and Higgins were teaching the group how to photograph at the perfect angle and giving tips on taking pictures in the shade, and educating everyone on the facts of these mammoth timbers and how these colossal Sequoias drink 3,000 to 4,000 gallons of water each day, whose roots are only 6-8 feet deep and stretch out to over 100 yards.

Next view was Bridalveil Fall, towering at 620’ it is one of the few that flows year round. Famous for its mist that floats in the breeze resembling the veil of a bride, this is a great short hike for an up-close look at the roaring water cascading down at such rapid force. Opposite from Bridalveil Fall are the rigid granite cliffs of El Capitan, the largest granite monolith in the world. At almost 3,000 vertical feet of rock, skilled mountain climbers from around the world take on the challenge of ascending these sheer cliffs. Take your binoculars because during peak-season as many as 50 climbers could be scaling the walls. Flowing off the cliffs of El Cap stands the awe-inspiring Ribbon Falls. Said to be amongst the highest single-drop waterfall in the US at a mere 1,612’ of surging water. 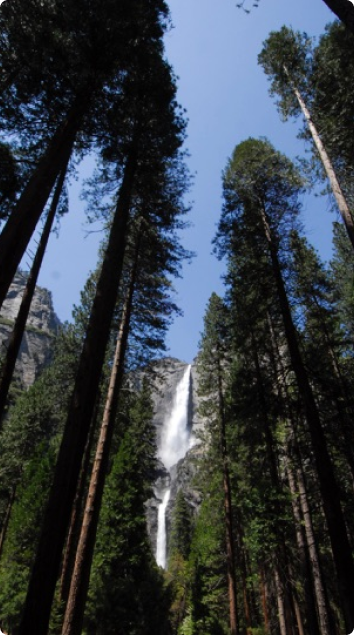 One of the many highlights of the journey was a stop at the breathtaking Yosemite Falls. Known to be one of the world’s tallest, all three cascading falls combined together dominant at a commanding 2,425 feet. This is one of Robbins favorite places to photograph her special ‘Moonbow’ or Lunar Rainbow. During a full moon, she has captured images of the perfect night rainbow from the colorful prisms reflecting off the moon instead of the sun. “I love shooting under the full moon. It is something completely unique and scouting diverse places at different times creates fabulous photographs,” commented Robbins.

Then on to see the rugged grandeur sculpture of Half Dome. A magnificently radiant crystal rock sliced in half like an apple standing at 4,737.’ Hikers can climb the cables on the 15-½ mile round-trip hike or ‘the face.’ The cable hike is the most significant day hike in the valley taking an average of 10-14 hours – up for the challenge? Pack comfortable hiking boots, lots of water and get an early start. The hike is definitely worth the work. With 900 feet of cascading falls (you will see both Vernal and Nevada Falls) and a birds-eye panoramic beyond-breathtaking view of the valley, it is worth every blister on your toes. Permits are now required to hike the cable section of the trail, for permit information go to YosemiteHikes.com or Recreation.gov. The vertical northwest face is another route taking an average of 2-4 days and considered a classic climb around the world.

The last waterfall view was from a different angle and one of Robbins favorite to show the group, back to Bridalveil Fall from the top of Tunnel View. During the late afternoon a natural rainbow reflects off the waterfalls with vibrant colors dancing off the mists of rumbling foam. Photographers were lined up with all types of cameras at this vista to shoot the jaw-dropping allure of the falls.

This was a photographic adventure to remember for a lifetime and a truly special place of magical splendor where sometimes one wonders how a camera can capture such magnificent sights. Both Higgins and Robbins showed adventurers the way – it is true that a picture captures a thousand words and brings beauty to our eyes and soul.