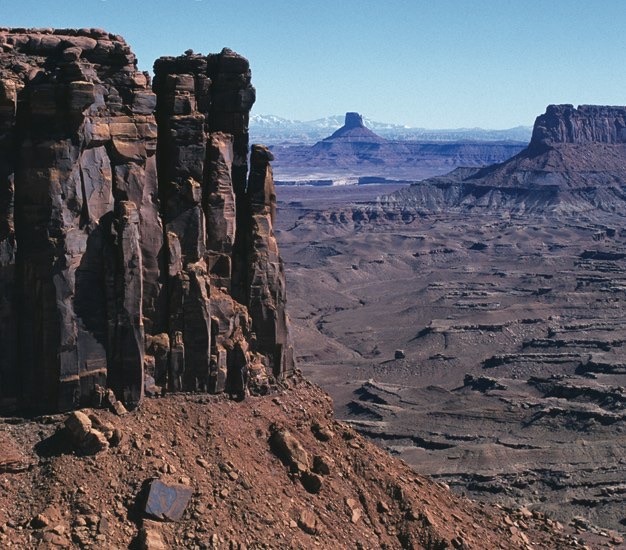 A Magical Flight Though the Great Southwest

“There is something infectious about the Southwest,” wrote native son H.M. Wormington. “The incredible sweep of the desert, of great golden mesas with purple shadows, and tremendous stars appearing at dusk in the turquoise sky.” Of ancient cliff dwellings and ruined pueblos. Outlandish rock forms and petrified forests. Of geologic time exposed in canyons and valleys that date from the Precambrian Period (more than 600 million years ago) and speak of shallow seas, receding glaciers, forces of continental drift that crumpled the earth before thrusting up mountains that rain, by torrent or rivulet, carved into shapes that today stand in bas relief even as they did for the dinosaurs.

The Canyonlands of Utah. The Sonoran desert of Arizona. The Jémez Mountains of New Mexico. From Canyon de Chelly in the wild and remote Four Corners area where Utah, Colorado, New Mexico and Arizona meet (in a nondescript parking lot) to Utah’s Cathedral Valley, home to huge monolithic sandstone remnants of skyscraping buttes, the Southwest is, indeed, magic infectious.

Perfect for an amazing flying adventure. This is a magical flight to inspire any private aircraft plan. A flight full of fascinations whether you’ve got one fine day or 20. It’s the Southwest USA at its best, guaranteed to reveal geologic awes whose wonders are well-appreciated from the air. Here is a trip through a region so fantastically magical that it is like a visit to another planet – an airborne thrill that can change your perception of the west forever. 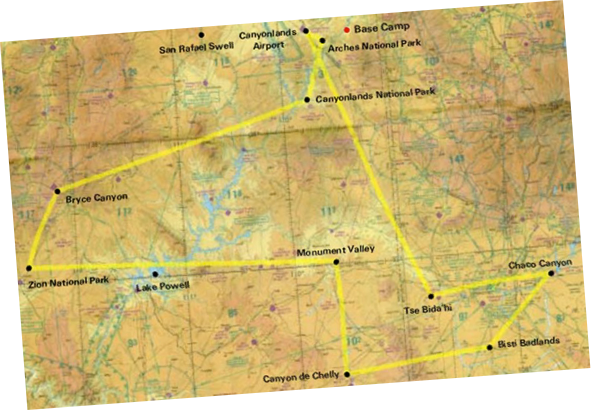 It’s wheels-down at Canyonlands Field Airport (CNY) in Moab, UT. Head east from Canyonlands Airport 6 miles to Arches National Park. Here, more than 2,000 eerie sandstone formations with such names as Fiery Furnace and Devil’s Garden astonish as completely as they did the Spanish when in 1776 they came through in search of an overland route to the California missions; the labyrinthine landscape amazes as thoroughly as it did Brigham Young when in 1847 he and his party of 148 Mormon followers came to scout out their “place on earth that nobody else wants.”

Next, head south 20 miles to Canyonlands National Park and what author Edward Abbey has described as “the most lonesome, grim, black, barren, desolate, savage quarter of Utah – the best place by far.” Gaze down upon the Island of the Sky – a district of needles that jut like monoliths heavenward. Amazing! Their names: Lizard Rock and the Golden Stairs.

Spectacular Bryce Canyon, now due west 120 miles, is where ancient bristlecone pines 2,000 years old share seclusion with towering sandstone monoliths, pinnacles, and chimneys found nowhere else on the planet. Other worldly? You bet. Early settlers christened some according to their astonishing proportions: Fairy Castle Formation. Wall of Windows. Cathedral. In Zion National Park, named for the Bible’s promised land (due south just 30 miles), the red-brown cliffs and sandstone peaks display the formations – Great White Throne, Temple of Sinawava – that awe-struck homesteaders reverently named after icons in the Book of Mormon; here the world’s largest arch, the Kolob Arch with a span of 310 feet, is the park’s preeminent jaw-dropper. 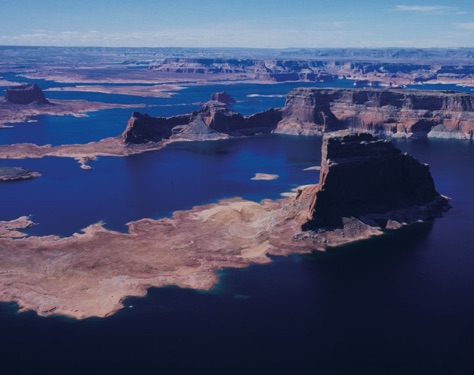 Now head east 50 miles to that wonder of wonders, Lake Powell; yet another 80 miles east are the Navajo tribal lands that straddle the Utah-Arizona border and there, the 8th Wonder of the Natural World: Monument Valley. Clusters of enormous spires, buttes and fascinating sandstone totems are the humbling view for the Hopi Indians who live in mesa-top villages in much the same fashion as their predecessors, the ancient basketmaking Anusazi. The culture of these earliest natives disappeared in 1300 due either to drought or, it’s debated, raids by nomadic tribes of Utes and Navajo. The valley’s famous Teardrop Arch is normally accessible only via Navajo guide and four-wheel drive. This is where you especially can revel in the privilege of flight. Canyon de Chelly is just 50 miles south. With walls steeper and more shear than the Ground Canyon’s, the Navajo’s “rock canyon” is not just mesas dazzling for their light-play festival of colors – golds and greens and siennas. It is not simply such sandstone monoliths as Spider Rock, which juts 800 from the canyon floor. It is, as well, something equally enthralling: the ruins of 400 primitive pit houses, cliff dwellings and canyon wall paintings that illuminate the lives of the ancient tribes once thriving here. Now head east towards the Farmington, NM area. In 65 miles (30 miles south of Farmington), you’ll see below the remarkable Bisti Badlands, 3,968 acres of giant mushroom-shaped spires surrounded by the bone-white cliffs of the San Juan Basin, once a shallow sea bordered by swamps and forests inhabited by dinosaurs; beneath the wild and desolate, fossil-rich moonscape that today is the happy home of snakes and scurrying lizards, there lie billions of tons of coal.

High on the Fajade Butte among the towering sandstone cliffs of the Chaco Canyon archeological site, 40 miles northeast (20 miles east of Farmington), you’ll see the pueblo ruins of a great Stone Age ritual center, as well as the solstice marker that told the ancients when planting should commence.

Heading west 40 miles (20 miles past Farmington) you’ll be above the Navajo reservation of north central New Mexico. Here it proudly stands: the tribe’s mystical Tse Bida’hi (“rock with wings”), the core of a dormant 40-million-year-old volcanic pinnacle that is a 7,178-ft jagged rock monolith not to miss; non-Navajo know it as the spectacular Shiprock Peak.

Fuel not low? There’s always the Grand Canyon (which you can’t miss on the right between Zion and Lake Powell), the pueblos along the Rio Grande from Santa Fe to Taos, the Petrified Forest and Painted Desert of Arizona and… the awe of this land, it’s true, just goes on and on.